The power to live as one wishes

"What then is freedom? The power to live as one wishes." - Marcus Tullius Cicero
Three days ago we left Grand Bahama Yacht Club and headed to Great Harbour Cay in the Berry Islands. Today we leave the Berrys for Nassau. 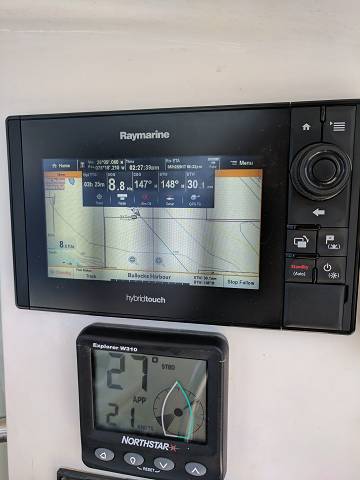 Our trip here was a pleasant day. We left the yacht club around 10am, with another yacht, S/V Exodus, scheduled to leave around noon. Once out of the Bell Channel and in the sea we put up the sails. With wind at 75 degrees off the bow, even with a speed of only 13 knots we were doing 5.6 knots. By 11am the wind had increased slightly to 15 knots and pushed us up to 6.1. By noon we had traveled 9.1 nautical miles and with the wind up to 17 knots we were up to 7.0 knots.
Around 1pm the wind turned and was coming from 110 degrees off the bow (that's 20 degrees behind the side), it had also pushed up to 20-22 knots. Now with the gennaker out we were flying, 7.8... 8.0... 8.2... 8.5... 8.8! We kept up this great speed until a bit after 6pm. As we entered the Berry Islands we doused the sails, started the engines, and covered the final 6 miles in an hour, finally dropping our hook at quarter past seven.
We sat waiting for Exodus to arrive, watching the sun get lower and lower in the sky. Finally as the sun was setting we saw a boat, looking through the binoculars we were pretty certain it was Exodus. By the time they finally arrived at the anchorage darkness had fallen and they anchored far out, uncertain how close they could safely make it in.
The next morning Exodus headed in to the marina at Great Harbour Cay. We stayed anchored out for the morning, finally heading in early in the afternoon.
Sunday, May 14th was Mother's Day. We waited for the restaurant at the marina to open, but nobody showed up. So the marina suggested a great little beach restaurant on the other side of the island, and drove us there in the pickup. With not enough room inside for everyone, Kyle and I rode out in the back (I don't think they have any traffic laws in the Bahamas).
Today we left Great Harbour Cay on our way to Nassau. We took our time and left around 11am. After two fish and a 7 hour sail, we anchored sheltered by Little Harbour Cay. Clearer skies gave us an even better sunset than two nights ago.
Tomorrow we are off to Nassau to meet our eldest daughter, Jennifer, and our (so far only) grandchild, Annabelle.